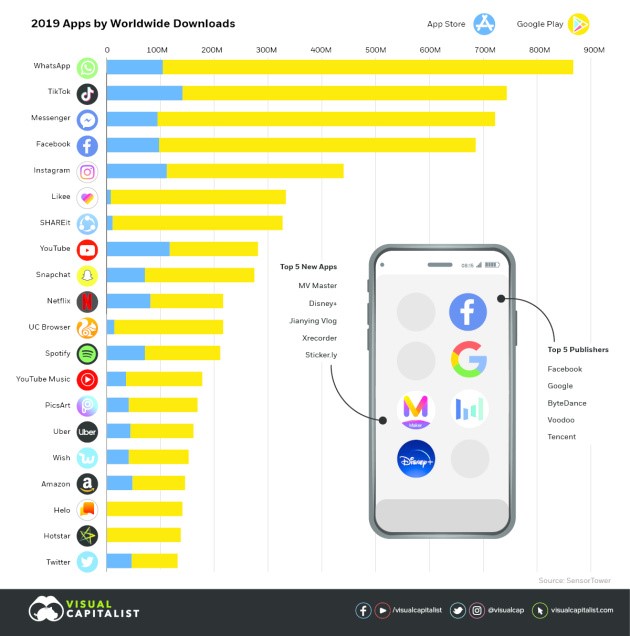 This is reported by Visual Capitalist, citing data from the Sensor Tower study.

Facebook owns four of the most popular programs of 2019: Facebook (4th place), Facebook Messenger (3rd place), WhatsApp (1st place) and Instagram (5th place). Together, they boast 16 billion downloads. It must be emphasized that the WhatsApp messenger has been ranked first for the fourth consecutive year. It was downloaded 900 million times in 2019.

In second place is the Chinese social media application TikTok, which creates and distributes video files and online broadcasts. This is the most popular short video platform in Asia, which has spread to other parts of the world and is rapidly gaining popularity. The application became the leader in 2019 among downloads of iOS devices. The revenue of the Chinese platform amounted to 117 million dollars, which is five times more than in 2018.

Among the countries whose users most often downloaded the above applications were India, the USA, Brazil, Russia, Indonesia, Mexico, Turkey, Japan, Vietnam and the United Kingdom.

India has become the best venue for TikTok. Citizens of this country accounted for 45% of the total number of users who downloaded this application in 2019.